By now it’s December, so I’m running way behind on posting this. But, those of you who follow my other social media like instarainbow, are able to see all the snaps I take with a phone 🙂

Halloween started early this year! I was planning with our party hostess in the beginning of September, I think.. She told me the theme ideas she had, and it became an ‘Enchanted Forest’. It’s a beautiful theme, very broad, you can do basically anything fantasy, I really enjoyed it! 😀

It was also very early in the season that I settled on a general idea of what I would want to do with this theme. This year we really wanted to succeed on having a squad of people that actually kept their costume in line with the theme and we did! But I wanted something that would be better than last year.
I woke up in the middle of the night and started sketching, so the sketch below in the album is that original idea. Once it was set on paper I was focused on finding out details on how to accomplish things,  the hair structure for example. But this was the plan from the beginning and I didn’t wander astray!

So what is it that I am? I was inspired by the ‘children of the forest’ from the Game of Thrones TV show. I wanted something like that, but with wings, elf ears, and a less I-was-literally-attached-to-a-tree kind of look. More of a magical look. A tad more fancy. But on the other hand, I didn’t want to be a fairy, I was going to be an evil, depressed version when it came to costume. I did obviously have a party and smiled and whatever, but the costume was intended as Evil Fairy.
Conclusion: I was a Forest Child, along with the rest of the girls 🙂

My friends and boyfriend are also shown in the album. The girls were dressed as a Fawn, another Forest Child That Walked Out Of The Forest With Moss, there’s my friend I did makeup for who’s sort of my Evil Fairy Sister, and my boyfriend was Robin Hood with scratches that I made.

The day itself was so much fun. My entire hair/makeup took over 6 hours. I love this. This is commitment!
And there was my friend, who was able to help out a little with painting my back, we had a really lovely day, then we all did makeup together at my house and we had pizza, and it was a really good day 🙂 Then we went to the party and I was tired AF because I’d been up since early and just exhausted from the whole day haha!

But it was a good Halloween year. This is what I live for.

For the occasion, I had dyed my hair (!!) with a colouring shampoo. It’s not permanent, it washes out after three washes or so. It was fine! My hair is not damaged and it’s back to normal now 🙂 Hairstyle: Sansa Stark.

I used scarwax to create a broader bridge of the nose and a strong browline. These edges were not blended perfectly like the professionals do it, but for me, this was my best attempt so far. Gotta start somewhere. Oh, and I created gills on my arms. I don’t really know why, I wasn’t a fish. It just was cool and went with the look.

Paint: Mehron, obviously. Yes, I was wearing contacts. I also used some powder products, most of those would have been Sugarpill, Sleek or BHcosmetics.

Costume: The top was a simple top that I shredded. The skirt was made by myself. The wings were made from scratch by myself using wire and kitchen wrap (iron it so it melts) and everything with leaves is also just crafted with leaves that I got at some shop.

If I missed anything, if you have any questions, let me know! Enjoy!

We had a theme party!!! I love my friends!
I saw my cousin on Saturday and she was like: are all of your friends’ parties like this? And I’m just like: with my friends, they are 😀 But even if it’s not, I will find an occasion to dress up.

The theme: Game of Thrones.

My take on that: the Mother of Dragons! 🙂 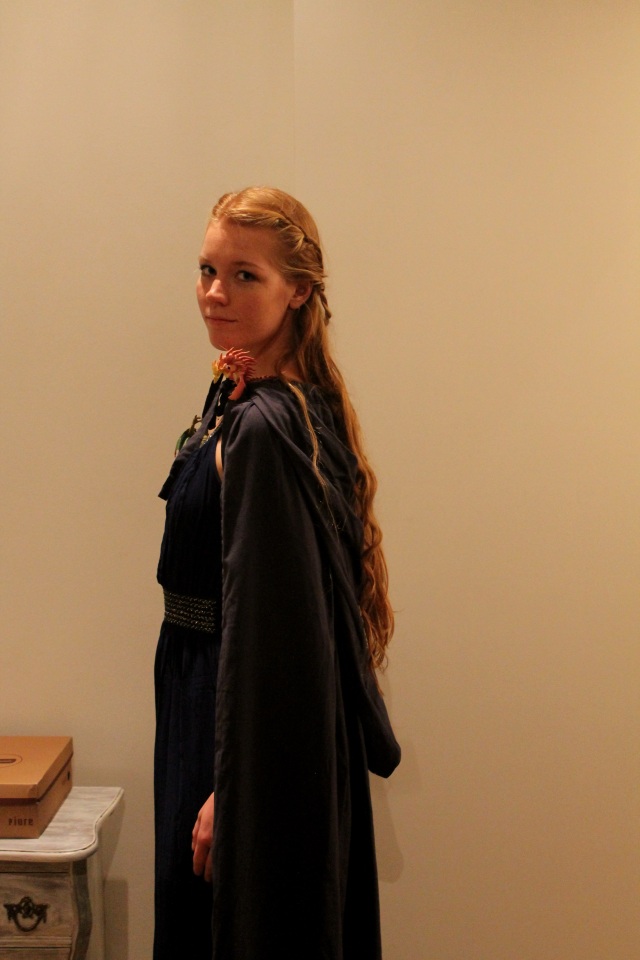 It was quite simple compared to the things I do sometimes.. I braided my hair, curled it a bit, and didn’t even change my makeup. I had this dark blue dress that I got in Italy over the summer, it’s a lovely maxi dress with golden details and a round neck, so that went perfectly with what I was going for. I wore my cape, I am so, so glad I have that cape! And the final touch is to get some 2 euro dragons at a random cheap shop, and tie them to the dress.

It was a very good party and we had a lot of fun, with another Daenerys, a Stark girl and a Direwolf, the other people didn’t really dress up.

Unfortunately, the next morning I heard about the terrible things that have happened in Paris on Friday night. Thanks to the media I only heard about Beirut on Sunday. I’m sure you are familiar with this media issue by now, and I agree with the critism.
I’m heartbroken. Not just for Paris, but also for Beirut, and for Baghdad, and for Kenya, and for all the other places bad things happened because some humans decided to take their hate to the level of taking the lives of others. I’m so sorry that this is the world we live in. It is not fair. It saddens me very much and my thoughts are with all of the victims, with the survivors, with all of you. I hope that all of my international readers, including the French, the Libanese and all others, are allright, as I hope your families and friends will be. I wish for peace for every single one of you.

Sending all my love,

Here’s some face doodling that I did this weekend, it’s been so long since I painted my face! I really should do this every week, because seriously, it makes me feel so good..

It’s a recreation of the always amazing Alexys Fleming, known as MadeUlook by Lex. She did not post a video for it, I just saw an older photo and thought it was a great day to become a dragon.
Then I thought, why not add it to the WILD series? 🙂

“I am the blood of the dragon” – Daenerys Targaryen 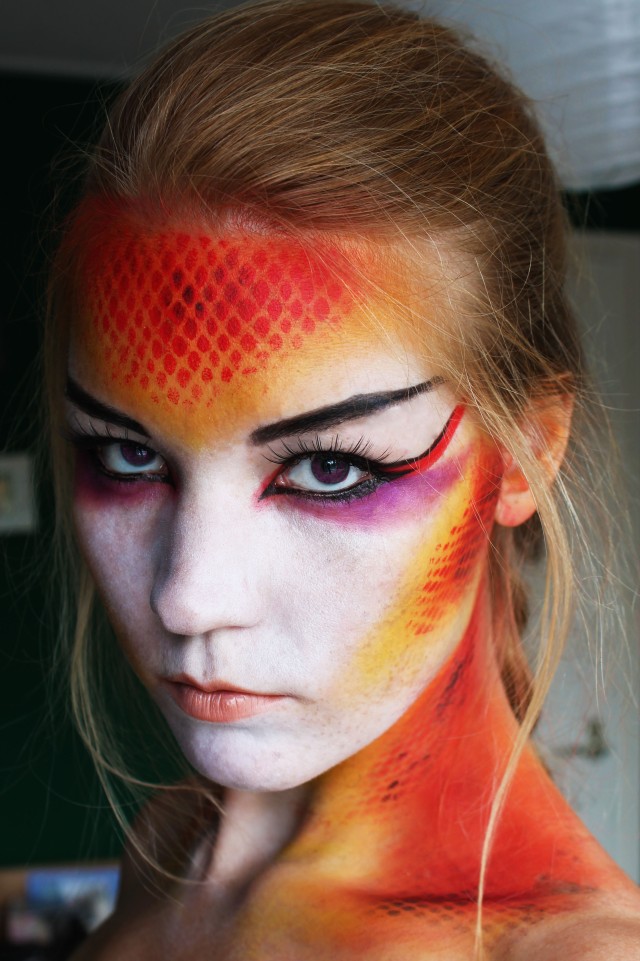 So you can either think of this as an animal/WILD thing, or a dedication to GoT, or just an artistic recreation of Lex’s, I don’t care, I just want you to know it was so much fun making this.. 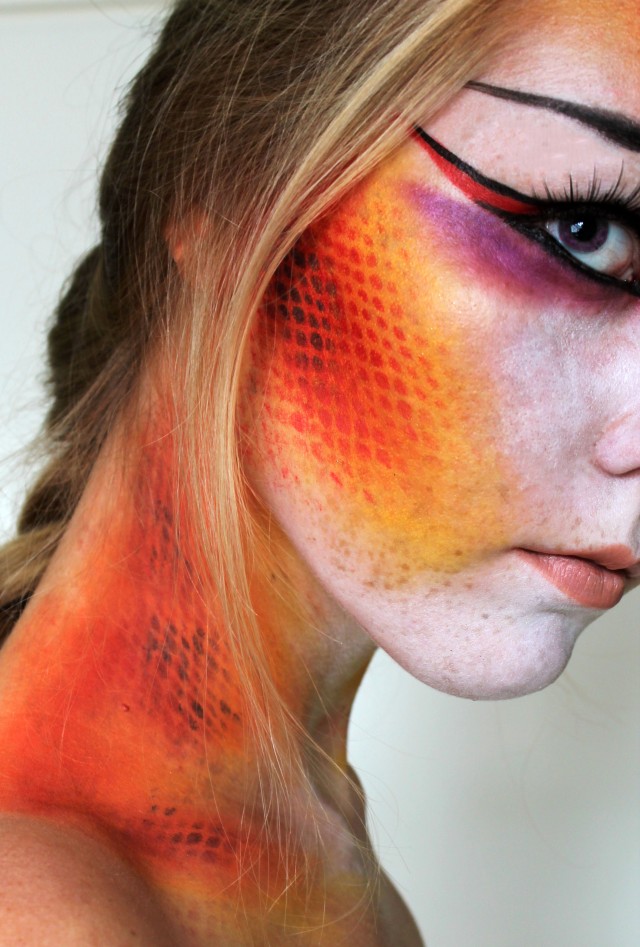 My stencil was very simple, I didn’t even make it myself. You know how fruit sometimes has this package in nettings or something? I kind off save those for these purposes. It’s so freaking awesome, I hadn’t used them before but AAHH love it 🙂
Other than that, I think this is pretty self explanatory, so, yeah, awesome 🙂 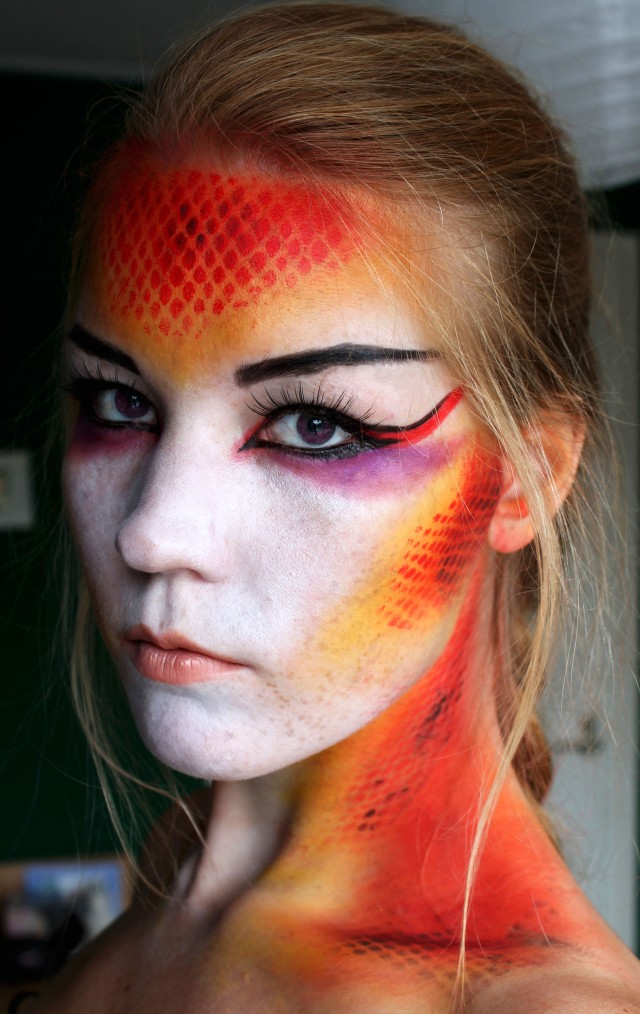 Halloween is coming up soon!!!!! The most wonderful time of the year!

#blackouttuesday
Meet Cinder, a character for a DnD oneshot coming up next week! 😊 Swipe for original art by Darkvolt! At least, I think that's the artist but not sure. My source is Pinterest.. I have been planning to get myself a drawing tablet for quite some time now, and wanted to get one for my birthday in March. Then before the season festivities my day job gave everyone these giftcards and I changed that to before the holiday! I got myself a Wacom Intuos, which came with Clip Studio Paint and 2 programs from Coral. I've been practicing my hand/eye coordination almost every day, and feel like it's going well. So last week I started my first actual drawing. I found this awesome image of a dragonborn with very human proportions, which is on the right. I used that as an underlay and learned to trace the upper body, while doing my own clothing for the lower body, and learned about colouring. I'm enjoying the process very much, and I'm most definitely going to draw more characters from our DnD sessions! My idea is that digital art is a new medium for me to try. I really love digital art I see on here and have been using that as inspiration for bodypaint for a long time. My goal is to be able to prepare sketches for bigger bodypaint works digitally, since i don't paint often. When I do paint, I want it to be GREAT and this way I can be prepared. Don't get me wrong, I also love freewheeling and doodling, I just want to try and take things to a higher level. This is one way of doing so, and I can turn it off after one hour and come back tomorrow 😊 Another goal is to draw character art for our dnd campaign! And those goals might get intertwined... #art #digital #animation #anime #dnd #dungeonsanddragons #dragonborn #smith #cinder #lunarchronicles #dnd5e #clipstudio #paint
After Halloween and theatre, I had this project of hand painted mugs for my Dungeons and Dragons group! It was my gift for the group for Sinterklaas. We're currently running a second campaign so our DM can play while another​player DMs, but our first campaign is my first game. And our ingame name in that is the 'Emerald Ensemble', so, I designed a thing for our group and painted everyone a personalised mug😊 All the characters have their name in their language on the mug, as well as the class symbol. I looked up some nice references for a DM symbol. There's a whole story behind the literal Emerald Ensemble, but you'd have to know our characters for that 😂 Anyway, I'm really proud of how this turned out, with the consistency and similarity, with the design itself and most of all, the faces of the group when they finally got to see these❤ #dnd #art #porcelain #paint #mug #painting #design #emerald #emeraldensemble #dungeonsanddragons